From cutting sugar to discovering new flavors, manufacturers such as Conagra and Danone are turning to the technology to get products to market faster and gain a competitive advantage.

IBM gained notoriety after its artificial intelligence supercomputer Watson crushed its human competitors on the question and answer game show Jeopardy! more than a decade ago. But now the 111-year-old technology company is hoping to answer a tough question of its own: Can it give computers a sense of taste?

Four years ago, researchers at IBM set out to answer this question, starting first with a liquid that is largely free of taste and can be difficult for a human to tell apart: water. After the computer became familiarized with different water samples that had slight variations in composition due to their mineral content, it was put up against human competitors to see who could better identify a water sample it had seen before. The computer won.

The circular-shaped disk undergoes its "taste test" by creating a digitized chemical composition of a liquid it has sampled. The "fingerprint" is then compared with other liquids in a database using artificial intelligence — a process that takes less than a minute — to identify a match.

While Hypertaste is still a few years away from widespread commercial use, IBM is working with industry partners on different applications for it. These include collaborating with food and beverage companies to capture and predict different kinds of flavors, and to quickly identify coffee, soft drinks and other offerings that would resonate with consumers.

Hypertaste is not meant to replace human experts, Ruch said, but rather to offload some of the most mundane or difficult tasks, like repeated taste testing of a product, to ensure quality remains the same from batch to batch. It also can be used to ensure authenticity, such as sussing out counterfeit wines or whiskeys, or to assist in product innovation by discovering new and different flavors.

Future applications for the technology could include finding contaminants in drinking water, tracing raw materials throughout the supply chain and checking for the presence of foodborne illnesses.

"The more people that are using it and can benefit from it and feed the data back into it, the better the technology will get," Ruch said.

Artificial intelligence is an increasingly popular tool for food companies. With countless bits of information and pressure to innovate and get products to market faster, companies are no longer just relying on traditional methods of R&D and testing. 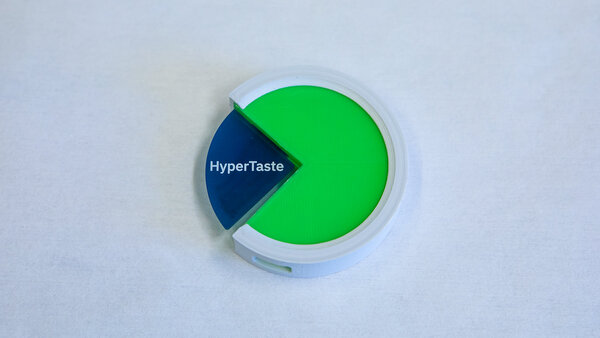 "Large companies have realized how much money they are wasting on failed product launches. It comes back to a recognition that their internal data is just not accurate,” Silverman said. “If we can give them that same level of data on if the customer will like it or not without having to do the whole launch, market test, ... bring it back in house, redo it, all those things are hugely valuable to them. That certainly has been a good selling proposition.”

Silverman said revenue at Aromyx has doubled each of the last three years, and the company closed its first Series A funding round at $10 million last summer to help it increase output. Business has been so brisk that the company is getting more business than it can handle, with a six-month backlog for new customers.

Silverman declined to say which food and beverage companies Aromyx is working with to protect any first-mover advantages they may have in the marketplace. Many of Aromyx's customers, he said, are hesitant to publicly acknowledge they are even working with his company.

" 'We don't want to tell our competitors we're doing this because then they'll start doing it. We don't want you to get more popular, ' " he said, citing discussions he's had with his customers. "The ones we're working with definitely view this as a major competitive advantage for them."